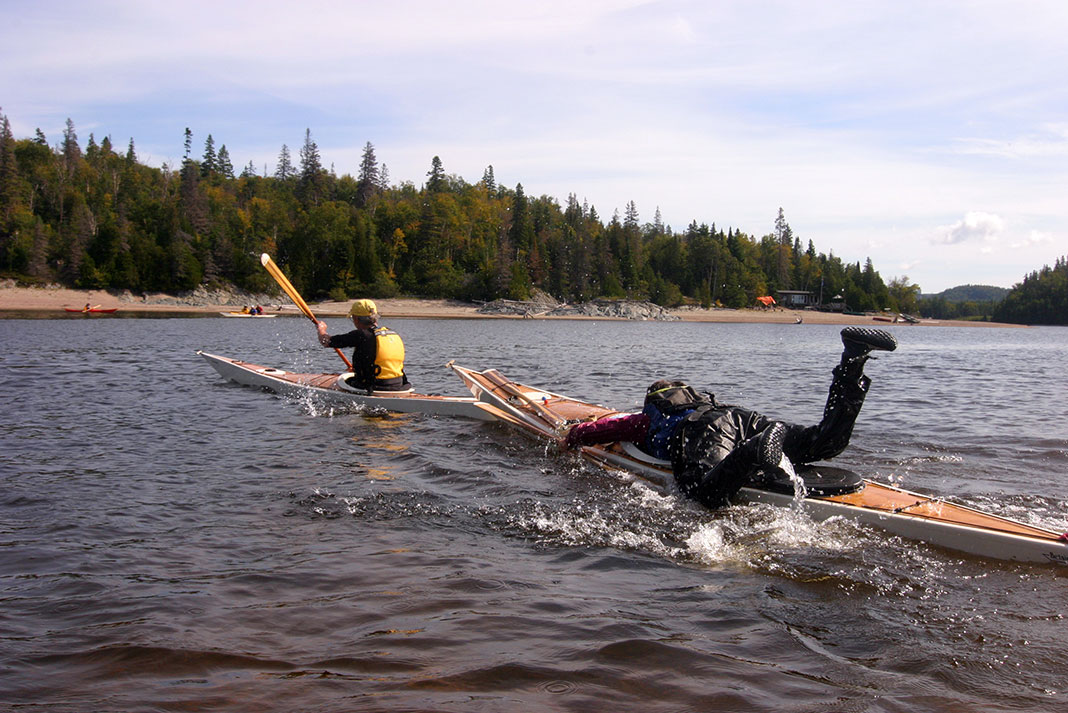 Sea kayakers can be a serious bunch when the time calls for action, but those same paddlers spend time honing their skills through play, and so should you. Unusual kayak skills such as the bowling ball roll or standing on the deck behind the cockpit are not just a fun waste of time, but are building blocks for your growth as a paddler.

Playing in your kayak is a fun, stress-free way of developing your balance and boat control, as many of these stunts have practical applications. Capsize while holding an XL bag of GORP? No problem. Wet launching off the side of a Patagonian tugboat? Not a worry, because you’ve been there before when the stakes were lower.

6 unusual kayak skills to try for yourself

An influential pioneer in the early introduction of traditional style paddling in North America during the ‘80s and ‘90s, Doug Van Doren may be best known to his students and symposium-goers for his outrageous improvised rolls. Van Doren says his rolling demos are definite crowd pleasers, but more importantly, useful teaching tools as well.

“I’m usually handed an object cold—I’ve never tried rolling with it before—so I have to figure out on the spot, in front of a crowd, what might work.

“I look at the object and try to work out if it might correspond with a roll I’ve done before.

“One of my early improv rolls was a metal folding chair—it’s not as easy as it sounds. I figured a chair is a little bit like a seal bladder [used in a traditional Inuit roll]—it has quite a lot of surface area. The trouble of course is that it sinks, so you have to get the resistance on the water before it does.

“Because rolling is mostly body mechanics, the real issue is figuring out how the object that you have can help you or hinder you the least. I once did a forward roll with a bicycle seat just because it seemed like that would probably work. I’ve rolled with an axe, garden rake, heavy metal chain, shovel, bowling ball and a latex glove that I blew up underwater—I dubbed that one the stupid roll.

“The improvised rolls help develop good technique because you have to not think about the weird object in your hand and focus instead on what really rolls the boat, and that’s body mechanics. If it distracts you, then you’re sunk. When you’re out in real conditions and have to roll, there are a lot of distractions—it’s usually in big surf, the water’s cold or maybe you’ve broken a paddle.

“I’m a proponent of playing in the boat—playing with rolling and playing in general. I like to sit on the afterdeck and paddle with my feet on the foredeck—that’s really good for balance and quick bracing. I love to do stuff like lying on the deck and paddling with my hands. Scrabbling from the water into the boat teaches comfort and familiarity with the kayak. Plus it’s fun, and frankly that’s what kayaking is all about.”

Get a refreshing perspective on boat stability.

Ginni Callahan, Leon Sommé, Shawna Franklin, Justine Curgenven and Greenland-style guru Doug Van Doren do it. So does the salty and sultry Freya Hoffmeister (when she’s not standing on her head or paddling around South America). Rising on trembling legs to stand triumphantly above your seat-bound peers will not only win you accolades, it will drive home with wet finality the importance of J-leans and staying centered while edging.

The hardiest kayakus erectus step it up to the back deck. Increase the challenge by elevating at the same time as your tandem partner. Work together and this trick gets easier, fail to support each other and it will all be over faster than Cher’s latest romance. A variation that builds group cooperation and communication is the raft-and-stand. Paddlers raft up side-by-side and hold together while one member of the raft stands and walks across the boats. Practical applications include on-water boat exchanges and rescues.

If you’ve messed around with static bow jams, you’ve probably figured out bow draws and bow rudders. If you need a review, a bow draw uses the pressure of water on the power face of the blade and is generally performed moving forwards. A bow rudder uses pressure on the back of the blade and is most frequently used when traveling backwards.

Perhaps you’ve even mastered cross-bow draws and rudders (reaching across the bow to perform the stroke on the opposite side). Congratulations, these are admirable achievements and handy skills for turning or staying straight when paddling and surfing. True showmanship, however, is found in the originality of the performance—why not see how many different ways you can perform the same stroke?

Sure, a reverse-inverted-cross-bow jam puts the blade in the water the same way as a standard cross-bow rudder, but the necessary contortions are so much cooler. Pre- and post-paddle stretching recommended.

One-armed high brace turns leave a hand free for other important tasks—like waving to your fans.

Using a brace lends support to aggressively edged turns, allowing you to crank your kayak around quicker. Most paddlers learn the low brace turn, while some rough water kayakers employ a high brace for turning across a wave face. But often overlooked is the one-armed high brace, an elegant flatwater maneuver that defines true performance kayaking.

To execute this move, begin as you would for a low brace turn, building up some speed and then initiating the turn with a sweep stroke on the opposite side. Switch from edging into your sweep to edging into the turn.

Now this is where it gets fun. Let go of the paddle with your outside hand (left hand if you’re turning right) and use your inside hand to lift the paddle shaft over your head and extend the paddle into the turn. Allow the shaft to rest across the back of your inside shoulder, drop the blade’s power face onto the water with a climbing angle, and edge your boat farther than you’ve ever dared. See if you can dip your cockpit coaming under the water. With your outside hand unoccupied, you’re free to wave graciously or blow kisses to your fans.

Practicing pivot turns isn’t terribly exciting, but this exercise turns lazy circles into a graceful dance or full-contact competition, depending on inclinations and testosterone levels. Grab a partner and position your kayaks bow-to-stern, side-by-side about five feet apart. Now begin alternating forward and reverse sweep strokes to pivot together in unison. Speed up and see how fast you can go without ramming.

Cross-train for excellence on and off the water.

This article was first published in the Summer/Fall 2011 issue of Adventure Kayak Magazine. Subscribe to Paddling Magazine’s print and digital editions, or browse the archives.

Fancy moves you will never use—unless you want to be a better paddler. | Feature photo: Virginia Marshall

You MUST do this to hike more miles!
Powder Days Could Sell Out at Jackson Hole Thanks to Discount Pre-Sale Tickets
Full-Body Supersets Gym Workout
Coyotes Are Here to Stay in North American Cities – Here’s How to Appreciate Them From a Distance
Sublime Encounters With Orcas In Norway
Death Valley’s Visitor-Trapping, Car-Wrecking Flood Was Its Second-Wettest Day on Record