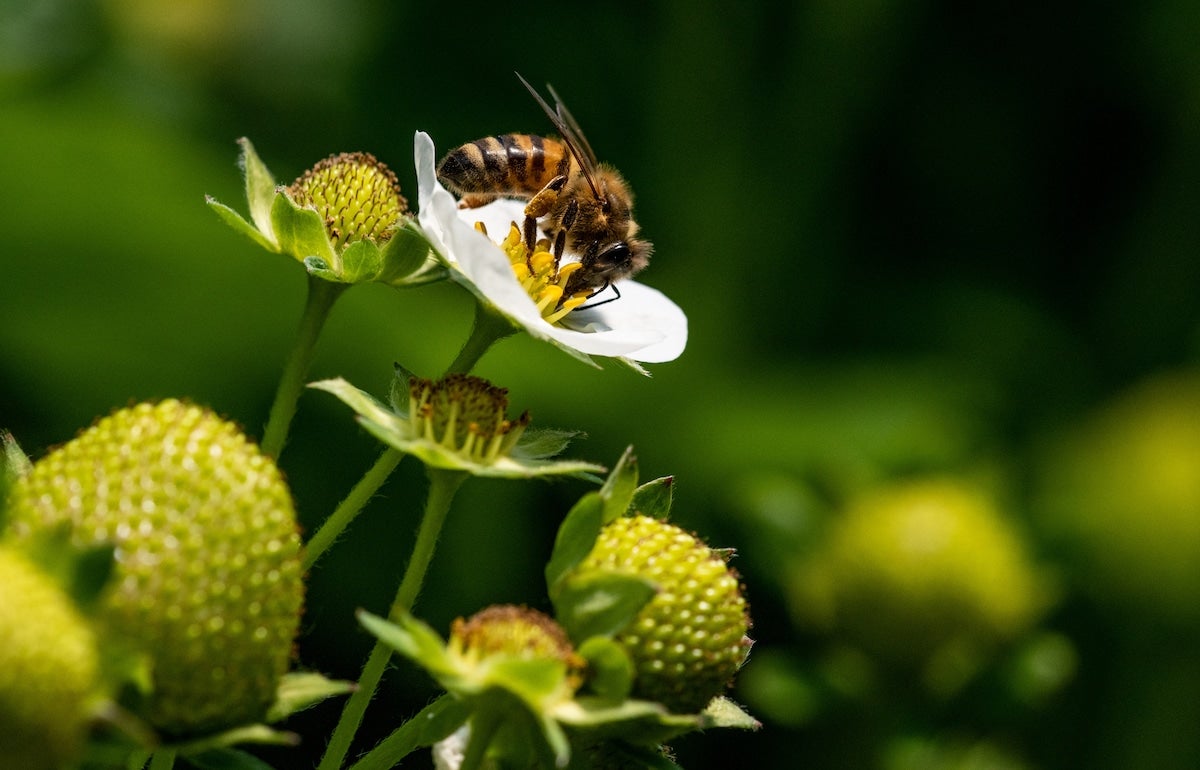 Bees are better for strawberries. About ten to fifteen percent of flowering plants are mostly self-pollinating, and strawberries are one of them.

However, when the plump and delicious berries are pollinated by bees, they are not only redder and heavier, they also have a more pleasing ratio of sugar to acid and a longer shelf life, according to a study published in the journal Nature. Pollination by the bees increases the hormonal growth regulators that enhance the berries’ quality.

Pesticides have been shown to interfere with memory and learning in honey bees as well as solitary bees. The chemicals have also been shown to diminish sperm viability and harm reproduction.

In a new study, researchers from Lund University in Sweden found that when solitary bees — bees who do not live in colonies or produce honey — were foraging from rapeseed flowers and ingesting the pesticide clothianidin, they became slower, a press release from Lund University said. The researchers also found that strawberries pollinated by these same bees were smaller.

Clothianidin and two other neonicotinoid pesticides were banned for use on outdoor plants by the EU in 2018. Thiamethoxam, one of the other pesticides, had been previously found to disrupt the pollination of apples by bumblebees.

“We studied bees that ingested clothianidin, a pesticide that was previously used in rapeseed to control flea beetles. Our study indicates that the substance made the bees slower and impaired their ability to pollinate the strawberry flowers,” biology researcher at Lund University Lina Herbertsson, who was the lead author of the study, said in the press release.

The study, “Seed-coating of rapeseed (Brassica napus) with the neonicotinoid clothianidin affects behaviour of red mason bees (Osmia bicornis) and pollination of strawberry flowers (Fragaria × ananassa),” was published in the journal PLOS One.

Upon weighing the strawberries, the scientists also found that those pollinated by bees exposed to clothianidin were smaller.

“Previous studies have shown that clothianidin affects wild bees negatively in terms of foraging speed, development and reproduction. Our results indicate that it can also impair the bees’ ability to pollinate strawberry flowers,” Herbertsson said in the press release.

Herbertsson said care should be taken when interpreting the study’s results.

“In our study, we did not identify the cause for the lower strawberry weight, and after only having performed a single study under rather special circumstances, we also don’t know if this is a general pattern,” Herbertsson said.

As human development replaces more and more wild spaces, the habitat of solitary bees — who build nests inside small holes in plant stems or trees — is increasingly under threat, according to Green&Blue.

“Although clothianidin is now banned, other substances that affect the nervous system of insects in a similar way have partly replaced it. It is therefore of the utmost importance to continue this research and investigate how these substances affect bee behavior and pollination,” Herbertsson said in the press release.

Cristen is a writer of fiction and nonfiction. She holds a JD and an Ocean & Coastal Law Certificate from University of Oregon School of Law and an MA in Creative Writing from Birkbeck, University of London. She is the author of the short story collection The Smallest of Entryways, as well as the travel biography, Ernest’s Way: An International Journey Through Hemingway’s Life.

You MUST do this to hike more miles!
Old Town NEXT Canoe – 50 Campfires
Two Years After the “Massacre on Max Patch,” the Mountain Is Healing
Coleman Lithium Ion LED Rugged Lantern
NZ vs WORLDCHAMPS – George Snook
Sea to Summit Watercell ST Water Storage