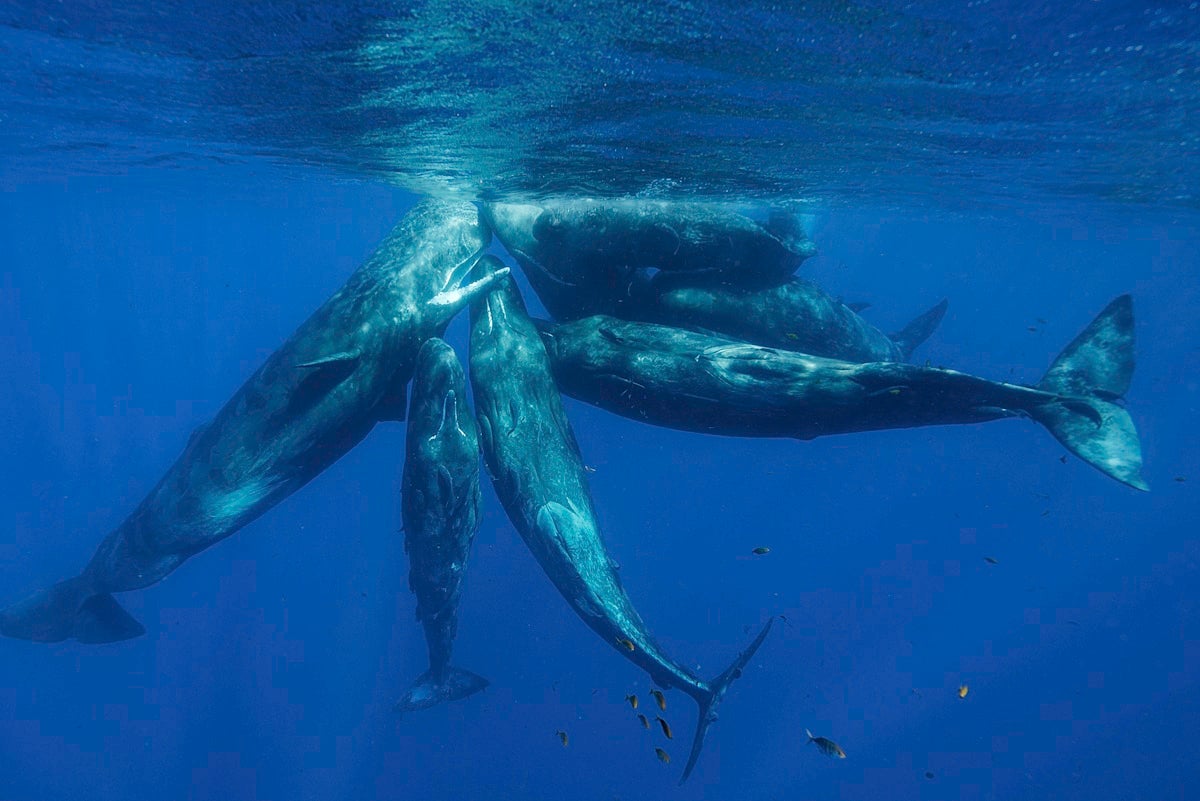 A pod of sperm whale calves and juveniles in a social group on the north west coast of Mauritius in the Indian Ocean. by wildestanimal / Moment / Getty Images

There are two types of whale: baleen — who have plates of a keratinous substance that sieve their prey from the sea; and toothed — who have teeth and hunt squid, fish and other sea creatures.

The sperm whale is the largest species of toothed whale and can be found in all of Earth’s oceans, according to NOAA Fisheries.

These majestic creatures, though massive — they can grow up to 52 feet long and have the biggest brain of any animal in the world — are generally friendly to humans.

Sperm whales are named for spermaceti — a waxy substance they produce that is contained in an oil sac in their heads and aids in focusing acoustic signals and helps control buoyancy. Humans hunted sperm whales almost to extinction from 1800 to 1987, and have used spermaceti in the making of candles, oil lamps, ointments and industrial lubricants. These magnificent whales are still recovering from their near-annihilation and are listed as depleted under the Marine Mammal Protection Act and as endangered under the Endangered Species Act.

In a new study, an international research team led by scientists from the Max Planck Institute for Psycholinguistics in the Netherlands and Dalhousie University in Canada looked at sperm whales over an unparalleled geographic area, the Max Planck Institute for Psycholinguistics said in a press release. The scientists discovered that symbolic attributes of cultural identification may be used by non-human animals in a way that is similar to ethnic groups in humans.

The 27-member research team that took part in the Global Coda Dialect Project shared their datasets of click patterns — which are similar to Morse code and known as “codas” — from 23 locations across the world, from New Zealand to Canada and South America to Japan.

“This work was the culmination of decades of research efforts by individuals working throughout the Pacific Ocean,” said Taylor A. Hersh, lead author of the study and doctoral candidate in the biology department at Dalhousie University, in the press release. “We decided to share data and work collaboratively, to learn something new about this enigmatic, charismatic, and cultural animal.”

The study, “Evidence from sperm whale clans of symbolic marking in non-human cultures,” was published in the journal Proceedings of the National Academy of Sciences.

Sperm whales are highly social animals who live in small family groups made up of mothers and calves. These groups are called clans and each has a unique dialect it shares with other members of its clan. All across the Pacific, specific patterns of clicks are used by clans to designate cultural groups, particularly when sperm whale clans overlap.

For a long time, researchers thought distinct types of codas were used to differentiate between sperm whale vocal clans, though earlier studies mostly focused on clans in specific regions.

In trying to determine if particular codas were comparable to ethnic characteristics like dialects in humans, the research team focused on clan-specific “identity codas” instead of those found across clans.

“Whales from different clans never interact with each other, even when they share the same waters,” Hersh explained in the press release. “This suggests that the whales have some way of distinguishing ‘us’ vs. ‘them,’ and we wanted to know if they do so using identity codas.”

The researchers wondered if distinguishable sperm whale codas would occur more often in regions where there were numerous sperm whale clans that overlapped as a necessity of indicating clan identity, in a way similar to regions with overlapping human cultural groups.

“Past research on vocal clans has shown that they not only differ in the codas they use, but also in how they move, forage, and socialise. This matches another human ethnic marker prediction: that symbolic marker and social norm distributions should correspond,” Hersh said in the press release.

Working with data from the Pacific Ocean, the team was able to extract 23,000 sperm whale codas and establish that there were seven particular vocal clans. Each had their own identity codas and dialect. The researchers found that, in a way similar to humans, as the overlap of clans grew, the use of identity codas became increasingly marked.

“Our results demonstrate how culture can structure animal populations,” Hersh said. “The conditions required for the evolution of symbolic markers of cultural identity exist among non-human animals as well.”

Having an increased understanding of non-human animal culture is helpful for species conservation in that it can help predict the impacts of human disturbance on populations.

“[W]e know very little about the social norms and ‘lifestyles’ of several of the Pacific Ocean sperm whale clans documented here, and hope to study their behaviour more in the future. While the present work focused on the Pacific Ocean, we plan to extend our analyses to sperm whales in the Atlantic and Indian Oceans too,” Hersh said in the press release.

Cristen is a writer of fiction and nonfiction. She holds a JD and an Ocean & Coastal Law Certificate from University of Oregon School of Law and an MA in Creative Writing from Birkbeck, University of London. She is the author of the short story collection The Smallest of Entryways, as well as the travel biography, Ernest’s Way: An International Journey Through Hemingway’s Life.